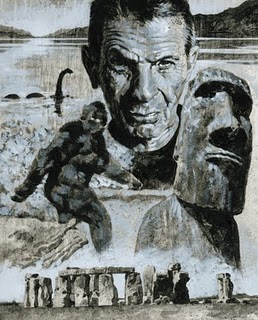 Sean Phillips: In Search Of...

When I was a kid, the single thing I looked forward to most on days when I was home sick from school was not the reprieve from math class. It was reruns of the Leonard Nimoy-narrated In Search Of, a show that covered topics ranging from (but not limited to) UFOs, Bigfoot, and playing crappy acid rock to plants. It appeared to be produced by the same people who made the original Clash of the Titans in the sense that the production quality was pretty bad, and there would be a random episode that would announce the date it had been made. "Wait. 1986? Really? Wow. This whole time I've been thinking that a bunch of stoners in like 1974 put this show together in an orange van while listening to Frank Zappa's Joe's Garage album on a record player in the back."

Everything about that program was terrifically horrible, down to the white turtlenecks that Leonard Nimoy wore. I mean, just look at this shit:

It's like the original BBC Hitchhikers' Guide to the Galaxy series goes out one night with Coast to Coast AM and has a three-way with a time-travelling Delorean, and the result was a school filmstrip that only belongs at the beginning of a Mystery Science Theater 3000 episode. The only thing missing is the high-pitched tone that indicates when the lucky student gets to advance the film.

Oh, In Search Of. You've abducted and probed my heart in ways mere mortals can only imagine.
Posted by Brianne at 6:13 AM