Of lillies and remains. And fluff.

I have a complicated relationship with cosmetics -- certainly one too wordy to properly delve into since I have to start getting ready for work within the hour. Surely, I'm a breathing dichotomy: A tree-climbing intellectual; a short-haired girly-girl; a cynic who has never lost her sense of childish wonder.

After resisting it for years, I finally got into make-up on my own when I was starting into my goth phase. I was a fan of heavy eyeliner and not much else. That was when I was fifteen or so, and I don't remember much else, really, other than wanting to look like Peter Murphy and Siouxsie Sioux (and, thankfully, not Robert Smith).

When my cancer diagnosis came in the summer of 1998, my mother had a rule that I had to wear my wig and make-up at all times. It didn't matter if I was puking every twelve seconds; I had to look "normal". She said it was "in case somebody came to the door", but I'm pretty sure an unexpected visitor wasn't going to go blasting into the bathroom like Kool-Aid Man. I harbored some resentment for that (and maybe I still do since I'm kind of protective of my patients at work): I had accepted my yellowing skin and lack of hair; it was simply who I was at that moment in time. Why couldn't everybody else? If they had a problem with it -- if they found it shocking or terrifying -- well, it was just their problem, and they'd have to get over it, now wouldn't they?

I still feel like that, I think. Why is it the cancer patient's job to look "normal"? They have enough to worry about, physically and psychologically. They already have to construct a new sense of "normal". Then again, that's another topic for another time. I could easily write about it for hours.

Maybe that's where the fear comes from that if I leave the house without make-up, something bad will happen. I was relentlessly teased for my nose until adulthood, so it's safe to say I have some insecurities over my looks. But, I'm sure everybody does. Actually, given the atmosphere of American advertising and popular culture, it's damn close to impossible not to. But again, another rant for another time.

Anyway, I'm a grown-up now, or at the very least, I do a pretty good job of pretending to be. In the past year or so I've gotten into cosmetics purely as a game to play or a sort of project: In short, it's fun. Turns out, there's a big difference between high-end, good quality eyeshadow and the crap you buy at Target. Yeah, I should've probably gone through this phase over ten years ago, but I was too busy scribing in notebooks, drinking black coffee, and planning on transforming into Henry Rollins whenever I became an adult.

A few months ago, I found out about Urban Decay cosmetics, and on a whim I gave their products a try because the colours were so radioactively vibrant. Ever since, I've been having a blast with this stuff. My inner girly-girl has been coming out and trying all sorts of bizarre and unholy combinations. I probably look ridiculous. Surprisingly, I don't really care, but somehow, that's the best part. I don't know if I could've said that a full year ago.

There was a sale going on a month ago, and I bought a bunch of new goodies for far less than what my original eye shadow palette cost me. Awesome. 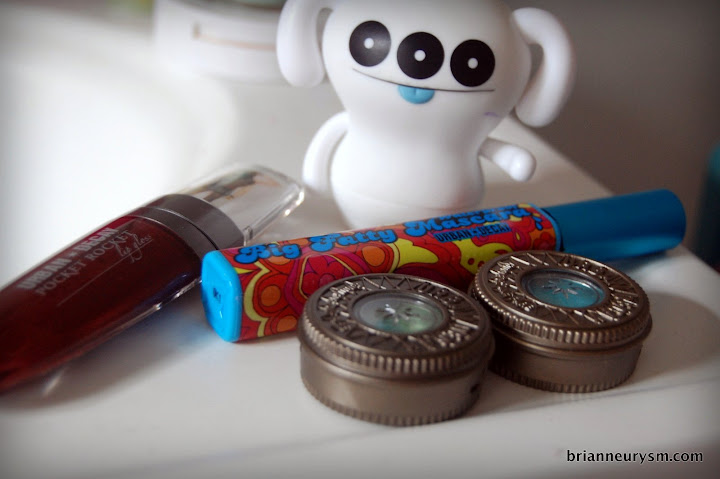 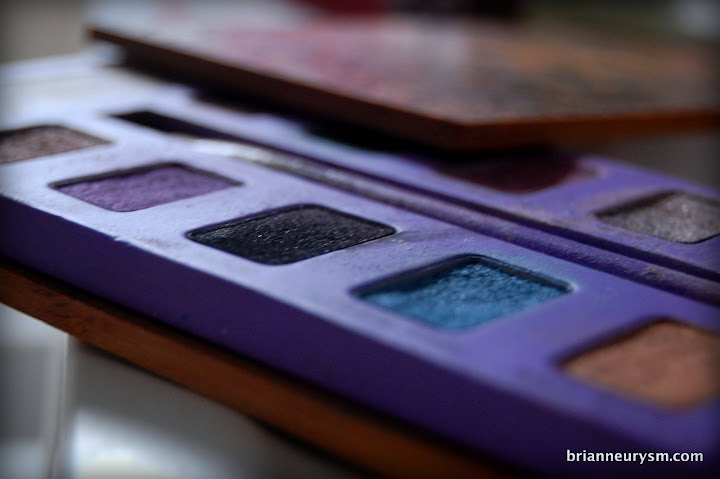 My order included two eyeshadows in "Electric" and "Chronic". The containers look like Steampunk subway tokens for some reason. 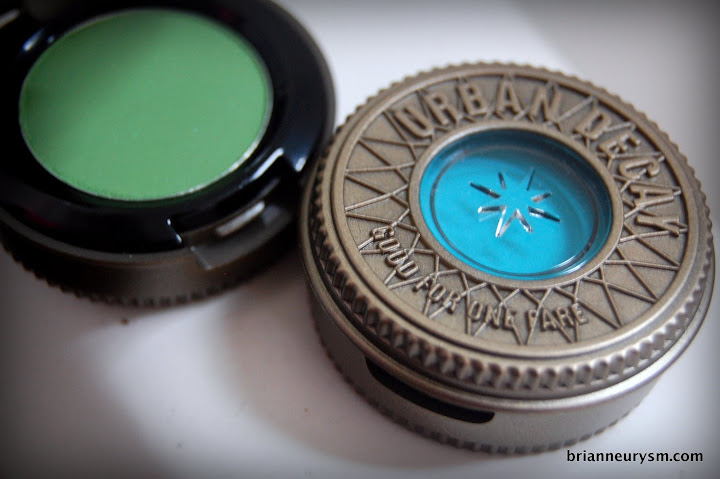 I also got Pocket Rocket lip gloss in "Jesse". I like it and everything, but I can figure out why there's some dude on the top of it that if you turn the right way, he's suddenly in his underwear. I fail to see how this is useful, or even amusing, in any way. 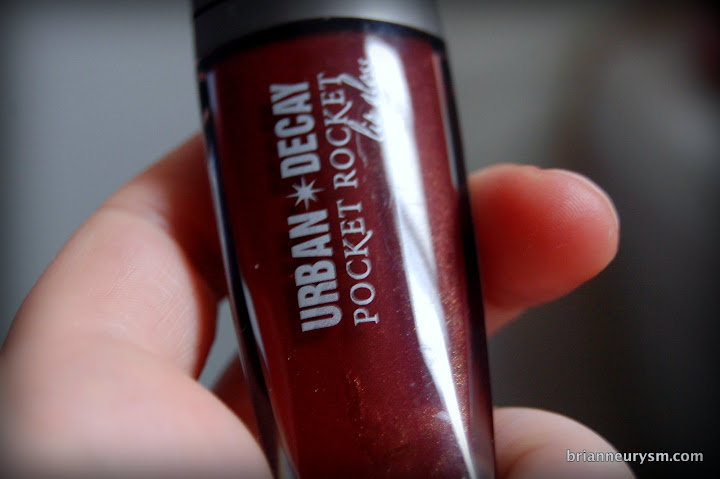 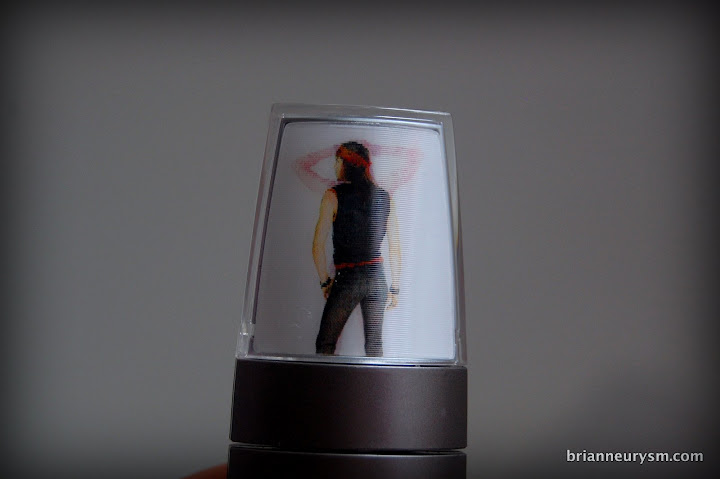 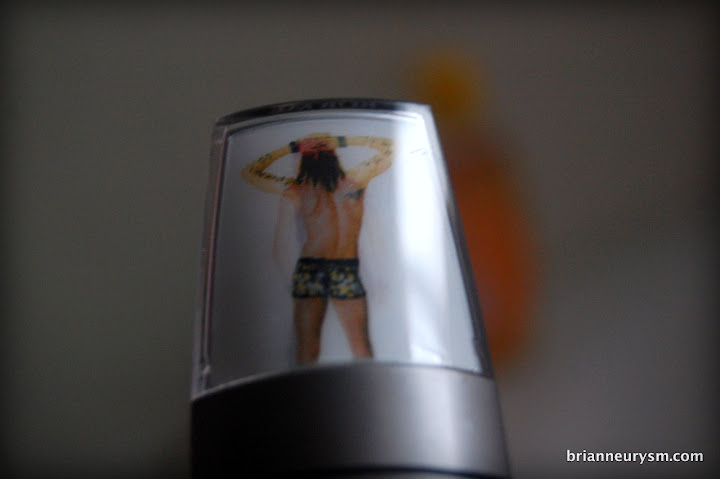 Especially because the lid of my other lip gloss is delicately ornamental and actually kind of pretty. 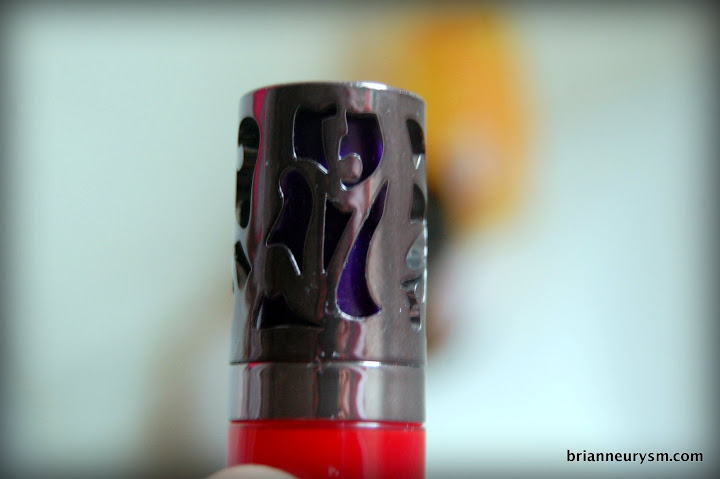 I got some pictures with Chronic and Electric and a touch of purple from the original palette set. Unfortunately, it was on one of the days in which I was in some endless state of epilepsy, so my face is oddly drawn. I was actually gripping the sink with one hand and taking the picture with the other -- the image stabilization on my Panasonic Lumix is amazing. But at least my eyelids are pretty. 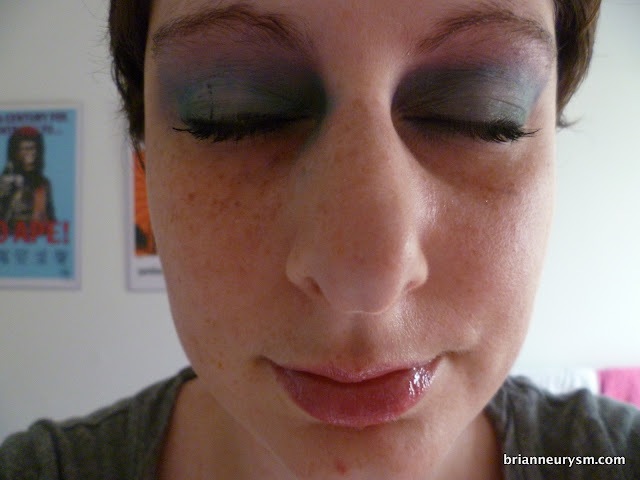 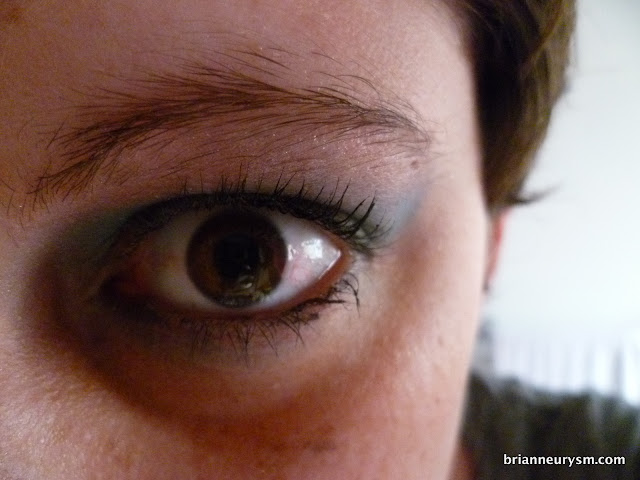 And one with my favourite pair of glasses: 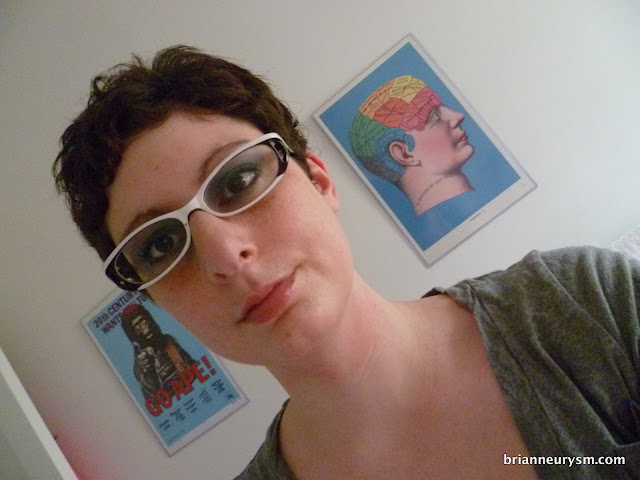 And yeah, I'm feeling a ton better than I was whenever these pictures were taken.

So, I guess that's it. A pretty boring post, but I should do that sometimes.

By the way, I have Google+ invites. Would anybody like one? My circles are looking pretty bare, and I hate Facebook.
Posted by Brianne at 2:11 PM